Copyright: © 2016 Arenas R, et al. This is an open-access article distributed under the terms of the Creative Commons Attribution License, which permits unrestricted use, distribution, and reproduction in any medium, provided the original author and source are credited.

Background: Menopause is the permanent and irreversible absence of menstruation for at least a year. Usually, it is accompanied by typical physical and mental symptoms. Although, infections during menopause have been extensively documented, there is a lack of information regarding superficial mycoses.

Objective: Our objective was to determine the frequency of superficial mycoses in menopausal age women.

Methods: This is a retrospective chart review of menopausal age patients seen at the Mycology section in a single medical institution in Mexico City from 1994 to 2014. Clinical, epidemiological, and mycological data were reviewed.

Menopause is the permanent cessation of menstruation for at least 1 year. It is due to declining ovarian function and estrogen deficiency [1]. In most women, menopause occurs at 50-55 years of age, although this is extremely variable. Premature (4th decade of life) and late (7th decade) onsets are not rare [2]. It is of interest that very little is known about cutaneous infections by dermatophytes and Candida spp during menopause. Herein, we will describe the frequency during a 21-year- period at a single teaching institution.

Retrospective chart review of menopausal age patients documenting frequency of types and agents of superficial mycosis (SM) in women at the Mycology Section at “Dr. Manuel Gea Gonzalez, General Hospital” in Mexico City, from 1994 to 2014.

Menopause was defined as the absence of menstruation for at least 1 year and diagnosis of SM was established by a positive KOH/Chlorazol Black E® (Delasco, Council Bluffs, LA). Clinical and epidemiological data were gathered in all cases including age, occupation, date of service, co-morbidities and their treatment, clinical presentation, and mycological study. The latter included KOH/ Chlorazol Black tests and culture was done on Sabouraud and/or Sabouraud agar with chloramphenicol-actidione (Mycocel®, Difco, Ann Arbor, MI, USA). For all positive cultures, we performed macro-and microscopic identification of colonies and classification of etiologic agents. When an opportunistic fungus was identified, it was isolated at least 3 times. If a yeast was isolated a commercially chromogenic Candida speciation media was used (CHROMagar©, Becton Dickinson co, Heidelberg, Germany), incubated at 37°C for 48 hours and following manufacturer’s instructions for identification (C. glabrata, C. kruzei, C. albicans and C. tropicalis). 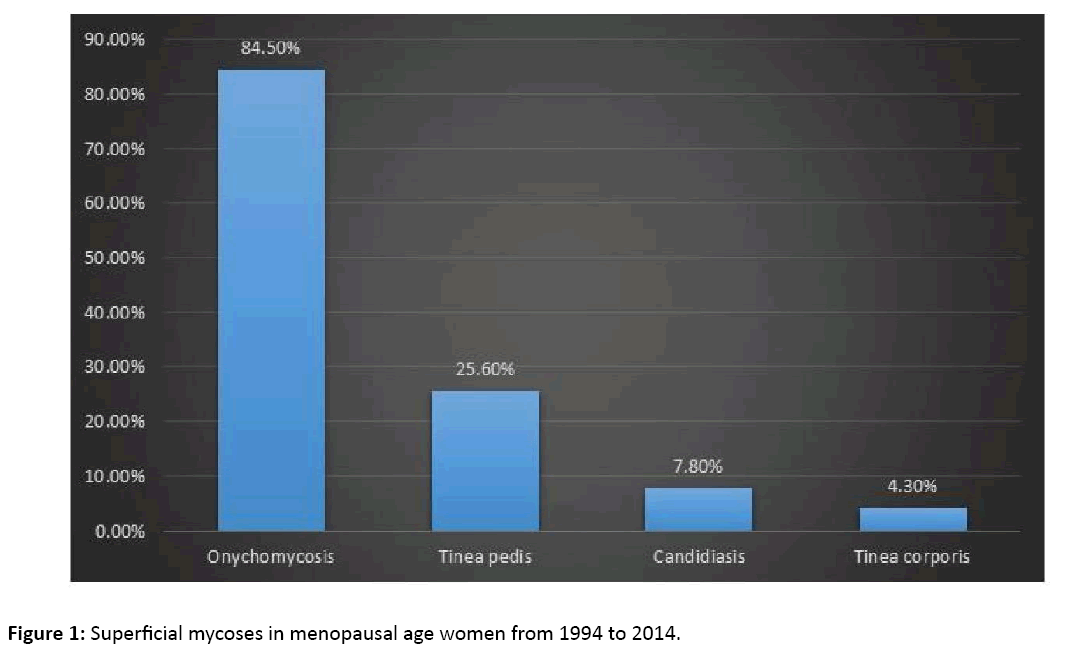 There is an abundance of data documenting the immunologic changes and deficiencies that occur during menopause, including sex-specific mortality and infection rates. In general, men are more susceptible to certain infections by bacteria, viruses, fungi, and parasites. Testosterone is immunosuppressive, and increases severity of tuberculosis, amebiasis, leishmaniasis, and malaria.

On the other hand, normal estrogen levels in premenopausal females lead to lower mortality from pneumococcal, meningococcal, and other infections (except sexually transmitted diseases and vulvovaginal candidiasis) [3]. For example, in the USA, bacterial vaginosis was documented in 23-38% of postmenopausal women. In contrast, Candida was present in only 5-6% of these patients, and decreased by 7% with each year of age [4]. In Italy, T. vaginalis or C. albicans vaginal infection was made in one-third of menopausal patients [5].

It is important to mention that skin diseases and especially SM in this age group can be related not only with menopause, but also with elderliness and other comorbidities as diabetes mellitus.

We found a similar frequency of tinea pedis (25.6%) to previous reports: 23% in patients older than 60 years of age in Spain [6], and 22-26% in Canada and Germany [7]. We also found as the most common etiologic agent T. rubrum followed by T. mentagrophytes.

As regards Candida infections, we found 3 predominant clinical presentations, including interdigital, oral, and intertriginous affection. The most common etiologic agent was C. albicans and C. krusei but Candida speciation was not confirmed in 15 (55.5%). The numbers were too small to draw significant conclusions, [4] and the literature regarding cutaneous candidiasis in menopause is very scarce. Most research has focused on mucosal infections. For example, in Italy T. vaginalis or C. albicans vaginal infection was found in one-third of menopausal patients [5].

Our cases include 35 patients with diagnosis of tinea corporis. The most common location was the trunk followed by buttocks, proximal extremities and face. The most frequent etiologic agents were T. rubrum and M. canis.

In sum, we have described a large series of menopausal women with documented cutaneous infections due to dermatophytes and Candida. The most interesting finding is an increased frequency of onychomycosis. The reasons for this increase are unknown but may be due to the various immunologic and endocrine changes that occur during menopause and aging. After menopause, there is an increase in several pro-inflammatory cytokines such as TNF-alpha, IL-6, and IL-1. Also, there is an enhanced response of immune cells to these molecules, a decrease in lymphocytes (B and CD4 T), and a weaker cytotoxic activity of NK cells. All these changes have been attributed to estrogen deprivation [9].

Additionally, in this age group, the skin suffers significant changes. There is dermal atrophy and decreased blood vessels, mast cells, and fibroblasts. The result is a thinner, dryer, and more fragile skin that is more prone to infection, trauma, and bleeding [10,11]. All these changes would suggest and explain an increased risk of infection by dermatophytes and Candida.

Limitations in our study include its retrospective nature and the lack of positive cultures in many cases. In addition, this paper is a purely descriptive study. Also, results from this Mexican cohort cannot be extrapolated to other populations.