Copyright: © 2016 Li F, et al. This is an open-access article distributed under the terms of the Creative Commons Attribution License, which permits unrestricted use, distribution, and reproduction in any medium, provided the original author and source are credited.

The frequency of invasive fungal infections has risen dramatically in recent years, and early and accurate diagnosis of these infections is important for appropriate use of antifungal agents. The value of serological tests is apparent, but they suffer from disadvantages, such as being time-consuming and their inability to produce simultaneous results. Protein microarrays are a convenient technology that can be used to perform high-throughput antibody detection and enable the monitoring of different antibodies simultaneously. We constructed a low-density microarray using purified recombinant enolase (Eno) fructose-bisphosphate aldolase (Fba1) from Candida and thioredoxin reductase (TR) from Aspergillus fumigatus as immobilized antigens. Following optimization of microarray construction and serum testing, we investigated the sensitivity, repeatability, and stability of the assay using sera from patients with invasive Candida and/or Aspergillus infections and control subjects. Sera from patients with invasive candidiasis (IC) were subjected to low-density microarray assay for detection of two antibodies from Candida and one antibody from A. fumigatus. Our results indicated a sensitivity and specificity of 67.6% and 96.5% for anti-Eno and 64.8% and 90.3% for anti- Fba1 antibodies, respectively. The combined detection of anti-Eno and anti- Fba1 returned a sensitivity of 81%, and in invasive aspergillosis (IA) patients, the sensitivity and specificity of detection were 71.4% and 98.2%, respectively, for the anti-TR antibody. The low-density protein microarray assay developed in this study was capable of detecting three antibodies against two fungi simultaneously, demonstrating its potential value in diagnosing IC and IA.

Invasive fungal infections (IFIs) remain a major cause of mortality in those undergoing hematopoietic stem cell or solid-organ transplantation, chemotherapy for hematological malignancies, patients in intensive care units, and those infected with human immunodeficiency virus. Invasive candidiasis (IC) and invasive aspergillosis (IA) are associated with high mortality rates [1]. Candida spp. Are found in the environment in soil and water and frequently colonize human skin and mucosal membranes, with endogenous colonization responsible for most IC cases. Candidiasis covers infections that range from superficial mucosal (such as vagina) to systemic and potentially life-threatening diseases [2,3]. Aspergillus fumigatus is a saprophytic mold responsible for life-threatening, invasive pulmonary diseases in immunocompromised and in some immunocompetent hosts [4].

Early and accurate diagnosis of IFIs are important for several reasons, including timely initiation of antifungal therapy and to decrease the unnecessary use of toxic antifungal agents [5,6]. Unfortunately, the lack of specific symptoms and signs continues to be a major obstacle to the successful IFI treatment, and currently there is a lack of sensitive and specific methods for the early diagnosis of IFIs.

Currently, commonly used diagnostic methods, including fungal microscopy and culture, histopathologic detection, and biopsy, constitute the gold-standard methods of infection detection, but these methods are far from ideal [4]. Therefore,use of serological-detection methods for the early diagnosis of fungal antigens associated with IFIs continues to increase as an attractive technique to augment standard diagnostic tools [7]. Alternative serological-detection techniques include the detection of specific antigens using commercially available tests to detect galactomannan and 1, 3 β-D-glucan and genomic DNA sequencing [8]. Such indirect tests (the G test to detect the fungal cell-wall component (1-3)-β-D-glucan and the GM test to detect the Aspergillus cell-wall component galactomannan) are noninvasive, easy to handle, and can be conducted within hours. Although the value and significance of these methods are apparent, they suffer from several disadvantages due to their time-consuming nature, requirement of large quantities of both sample and reagents, and inability to produce simultaneous results.

.Low-density microarrays allow rapid, simple, and parallel detection of many elements in a single assay that can be used to perform high-throughput detection and offer great potential for disease diagnosis [9-11]. Multiple antigens can be immobilized on a slide or a membrane as capture probes to facilitate the monitoring of a number of antibodies simultaneously. Previous studies showed that Candida albicans enolase (Eno) and fructosebisphophate aldolase (Fba1) are major immunodominant antigens in IC patients and animal models, whereas Aspergillus thioredoxin reductase (TR) is the immunodominant antigen in patients infected with Aspergillus [12-14]. Here, we developed a low-density microarray assay by immobilizing these three fungal proteins onto a nitrocellulose filter and investigated the performance of serological diagnosis of invasive infection with Candida spp. and A. fumigatus.

The protocols used in the microarray assays for serum testing were optimized in our laboratory and included loading concentration and loading buffer for the three antigens, antigenimmobilized conditions, blocking buffer, and dilution of patient sera. According to the optimal conditions, protein-microarray devices were constructed by Nanjing Potomac Biotechnology Co. Ltd.

For serum testing, 300 μL washing buffer (0.01 M phosphatebuffered saline with 0.1% (v/v) Tween-20 (PBS-T) (pH 7.4)) was applied to the reaction chamber to moisten the nitrocellulose membranes, followed by the application of 80 μL serum for antibody-antigen reaction. After serum passed through the nitrocellulose membrane, it was rinsed with 300 μL washing buffer, followed by the addition of 400 μL immunogold (colloidal gold-conjugated secondary antibody). After immunogold passed through the membrane, excess immunogold antibody was washed with 400 μL washing buffer, and after 20 min, the microarray devices were loaded into the PBT-X4 scanner and analyzed using the software Smartboy 3.0 (Nanjing Potomac Biotechnology Co. Ltd.). Red spots on the membrane indicating antibody-antigen reactions were scanned by the microarray scanner and converted to gray values using the software.

Variables without a normal distribution were expressed as median and interquartile ranges (25th–75th), and comparisons between two groups were performed using the Mann–Whitney U test. The potential of the three specific antibodies to be used as diagnostic markers was tested using receiver-operating characteristic (ROC) curves with calculated area under the ROC curves (AUC). The chi-squared test was used to compare the two detection methods. All tests were two-tailed, and a P<0.05 was considered statistically significant. Statistical analysis was performed using SPSS 18.0 for Windows (SPSS, Chicago, IL, USA). 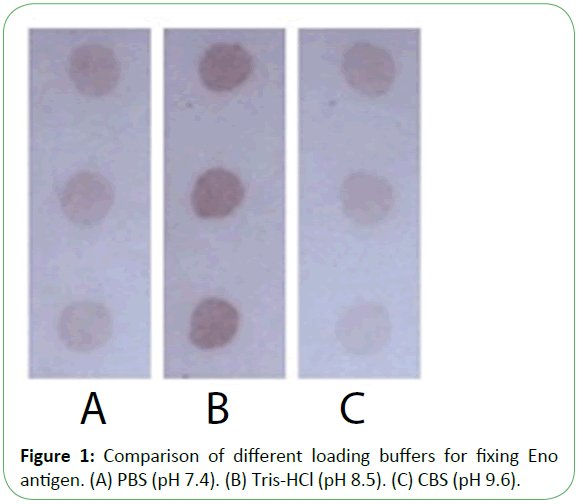 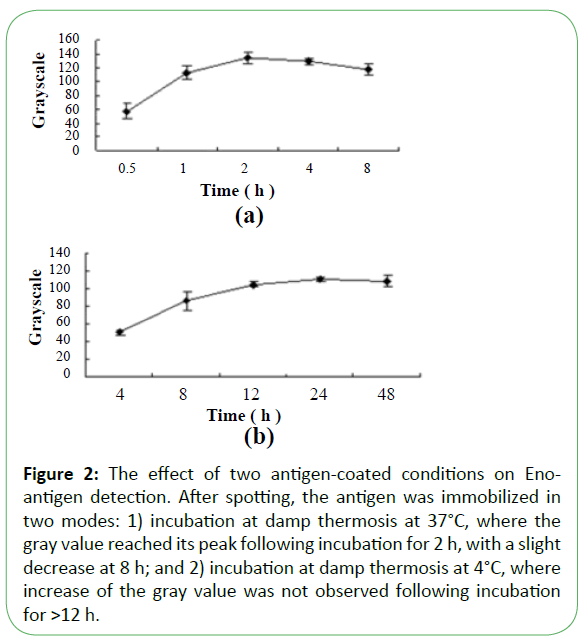 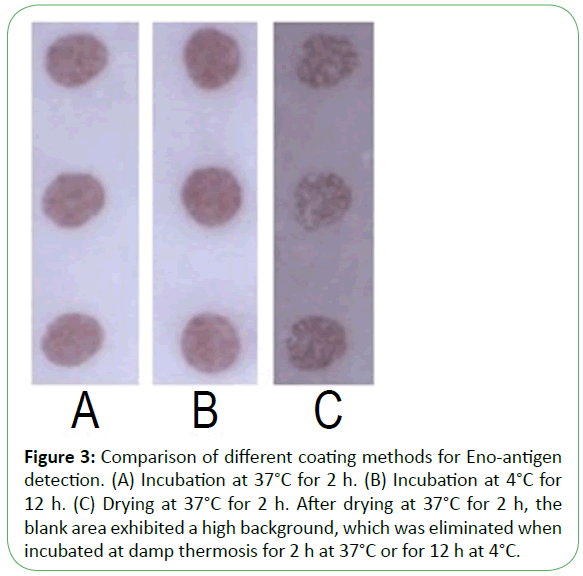 Specificity: Blocking tests were conducted using serum detected as strongly positive for the antigens of interest according to ELISA. Sera were diluted to 1:10 and incubated with recombinant antigens at different concentrations (0, 0.5, 1, 2, or 4 mg/mL) for 1 h at 37°C, and after drying, the microarray was scanned. The results suggested that when the final concentrations of recombinant Eno, Fba1, and TR reached 1 mg/mL, 0.5 mg/mL, and 2 mg/mL, respectively, the gray values from the scanned results were successively reduced from 188 to 33, 130 to 13, and 166 to 12, respectively indicating that the testing results exhibited high specificity. All these results indicated the microarray devices leading to good repeatability.

Stability: Protein-microarray devices using the same samples preserved at 4°C under vacuum conditions were used to test antigen-positive sera and mixed sera from controls every 15 days, and the results were compared to those from freshly prepared devices scanned within 24 h. The results indicated that the sensitivity and specificity of the test decreased gradually along with increased storage duration.

Diagnostic value of the antibody test on IC and IA patients

Table 1. Serological and microbiological surveillance of patients with IC and Candida colonization (n (%)).

Table 2. Diagnostic value of anti-Eno and anti-Fba1 on the test cohort. 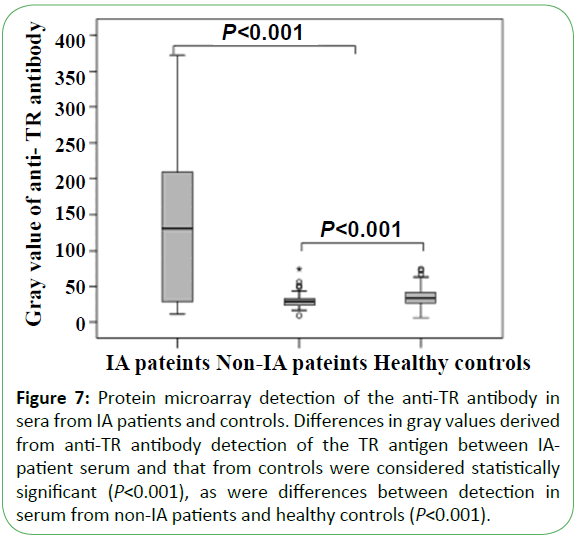 The clinical diagnosis of IFI, a common infection that can cause death in immune-compromised patients, remains difficult. Recently, detection of fungal infections by serological methods through the recognition of fungal antigens, antibodies, and metabolites, has become an attractive field of study [17]. ELISA is currently used as a common serological-detection method; however, this method is time-consuming, labor-intensive, and requires large quantities of sample. Compared with the traditional methods, protein microarrays based on low-density microarray devices are advantageous because [18,19]: 1) they require small sample volumes and exhibit detection at the nanogram level; 2) they enable high-throughput, parallel analysis of thousands of protein samples within a single experiment; and 3) they exhibit a high signal-to-noise ratio.

Based on our optimized conditions, we prepared the proteinmicroarray devices to detect antigens in sera from IC and IA patients using three specific antibodies. Our results indicated that the methodology exhibited excellent specificity, repeatability, and stability and would meet the requirements of a clinical laboratory. These findings provide a foundation for further research in clinical settings to evaluate the technique for clinical applications.

Our results indicated that joint detection improved diagnostic sensitivity, but reduced specificity, which is required to exclude false-positive diagnosis. Suspicious positive results derived from the application of low-density protein microarrays should be retested using ELISA to confirm test results. However, all methods should be combined with investigation of patient medical history and laboratory, radiological, and histopathologic examinations to ensure a correct diagnosis.

This study described a new diagnostic method for detecting associated antibodies from Candida and Aspergillus infections, providing a foundation for future work in this area. Additionally, some previously reported immunodominant antigens capable of use in the diagnosis of IFI, such as histone methyltransferase fragment, dipeptidyl aminopeptidase VDPPV) and so on [21,22], were not included in this microarray device; therefore, this method requires further improvement by increasing the use of other dominant antigens to enhance diagnostic sensitivity and accuracy.

This work was supported financially by the Jiangsu Science Foundation (BE2009673).

XC and CFM contributed to the analysis and interpretation of data and drafted the manuscript. FQL conceived, coordinated, and designed the study, LNS and YAH performed the experiments and was involved in drafting the article. All the authors have read and approved the final manuscript.